Purpose of the Research Project

This project aims to establish a new science concerning “Soft Crystals”, which responds to macroscopic gentle stimuli (e.g. vapor exposure, rubbing, and rotation) that exhibit visually remarkable changes such as luminescence and optical properties. This project also aims to develop novel functional materials on the basis of the scientific achievements. “Soft Crystals” are regulated solids with stable and highly ordered structures. However, they are characteristic of facile structural transformations and phase transitions in response to weak but particular stimuli (Fig. 1). One of scientifically most important challenges is to clarify the phenomena of the formation and phase-transition of “Soft Crystals”. Through the scientific research, we aim to create a new area, which can provide new materials beyond the conventional hard crystals and/or soft matters. 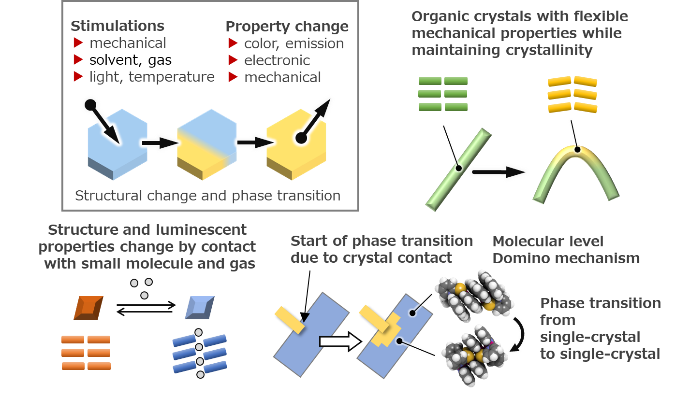 Contents of the Research Project

In this research area, the following three research items are promoted cooperatively to establish a new fusion area with the concept of Soft Crystals.

For all three items, several experimental and theoretical research groups will collaborate closely with each other for effective studies. Intensive studies will also be performed collaboratively over these research items.

Recently, there are successive reports concerning new crystals which exhibit sensitive changes in luminescence and/or optical properties in response to gentle stimuli. However, those discoveries owe the serendipity or screening because those phenomena are influenced by many complicated factors. It would be essential to understand various factors that govern the formation and phase-transition phenomena of molecular crystals constructed by various intermolecular interactions. Through close collaborations concerning material creation, structural control, physical measurements, theoretical studies, and functionalization, we will achieve the establishment of a new scientific arena, Soft Crystals for the first time to the world. The deep understanding of such complex systems will lead the development of novel materials such as sophisticated responsive materials or those with special functions (Fig.2). 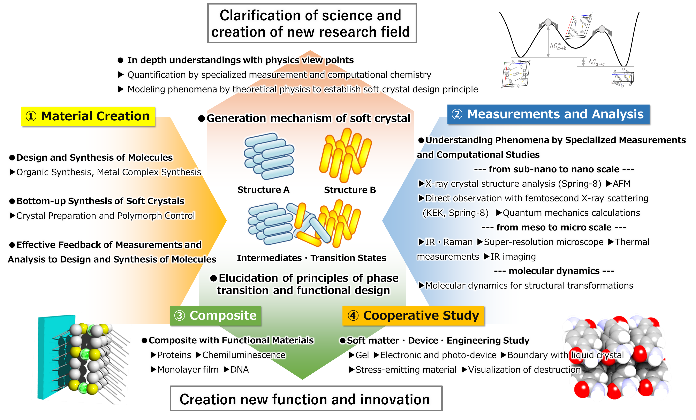